Sunday. The last day of a caffeine-fuelled, flurescent-lit weekend at my ushering job. I had worked around 22 hours over the course of the two days and whilst the noises of the brass instruments playing at the festival were starting to quieten down, I could still hear their echoes in my head. One hand on my side as if to hold in the period cramps, the other on my Kindle as I sat outside the concert hall doors waiting for the last performance to finish.

Naturally then, when my boyfriend suggested we go to a gig I readily accepted.

Working at a university, albeit casually, has probably given me a new lease of life. Whilst working two jobs can be tiring, something about being around the imperceptibly young recharges my spirtual battery. I was described as "spritely" yesterday. And it's true; I am in much better spirits than when I'm sat behind a desk all day. 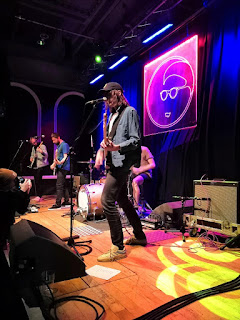 One hour after I'd finished work, I was in the car driving to Band On The Wall. The gig was Cloud Nothings. I'd seen them once before and listened to them on and off since 2012. They are one of those bands where I cannot recall a single song, despite their 2017 release Attack On Memory being one of the twenty five CDs we had to sustain us when Josh and I drove around Europe for a while. Cloud Nothings manage to sound like both Feeder and Finch in the same song, with the lead singer's chameleon voice screeching and straining the parameters of every song.

A perfect choice to wake me up, then. Cloud Nothings played for around an hour, reminding me of all the songs I'd forgotten. I was right at the side of the stage (seats!) and noted that I find myself waiting to leave a lot less when I have the security of knowing I could sit down at any time. Some observations:

All in all a nice way to end a long weekend. Band On The Wall was a great venue for this gig, the crowd wasn't massive and they weren't dicks. My vision wasn't obscured by a row of gangly giants, who seem to gravitate towards me (or rather in front of me) at events like this. I left the venue pleasantly deaf.