Twenty Years Of The X Files

"It's just a phase!" My exasperated mother snaps at me as I plead and bargain for ten more minutes online.

It's 2000 and I am twelve years old, battling with a crackly dial up connection, impatiently waiting for pages to load on the dusty eggshell monitor of our Windows 95 computer. Click, save, pause. I eject the bright orange floppy disk from its carriage. It's one of my most precious possessions; holding a whopping 1.4 megabyte of audio clips from my favourite television show: The X Files. 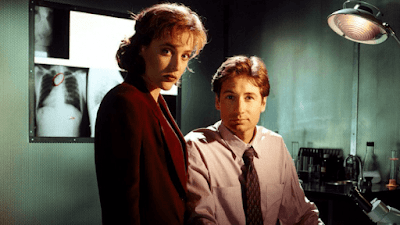 The X Files was a natural progression from Sabrina the Teenage Witch and Buffy the Vampire Slayer. I was a horror geek without realising, transfixed with the human cost of living in a world that feels wrong and unnatural. Gee, symbolic much? I felt adult watching the show, earnestly snacking on sunflower seeds because that was what Mulder ate. I loved the creepiness of the Monster Of The Week episodes, which already looked pretty dated, and tried to get my head around the long-running mythology arcs.

On weekends a frequent family activity was going to car boot sales, and I would scour every table for battered VHS tapes of earlier episodes, desperate to work my way back to the "classics",  having only discovered the paranormal drama late into the sixth season. I'd beg my dad to haggle over dog-eared guidebooks and rattling cassette tapes to feed my obsession.

In the glory years before my parents cancelled the television contract which blessed us with Sky One, I practiced the art of staying up past my bedtime to watch Mulder and Scully investigate strange goings-on. I would try to make myself as small and silent as possible, scrunched down into the armchair hoping whatever held my mother's attention upstairs lasted another twenty minutes. (Spoiler: it didn't, and it took me about five years to see both Dreamland Part 1 and 2)

I found a home on the internet years long before kids my age thought to hide there. There was no social media, but there was an X Files message board, hosted by Fox, for fans to discuss the show. We talked about our favourite monsters, broke down the conspiracies, and argued over whether Mulder and Scully really were in love (The word "Shipper" has been used for decades, although I was a staunch "NoRomo"). Back before you listed your real name and age online, I was a thirteen year old kid finding their voice in a surprisingly safe environment. I even wrote a fanfic: Scully Meets Pokemon.

I tried my hardest to cover my mint green bedroom walls with Smash Hits posters from bands I didn't know and music I wouldn't have recognised if you'd taped it off the radio to play for me. But the X Files is now my purpose, and the family printer churns out smudgy, inky portraits of my beloved nineties dreamboat: Fox William Mulder. 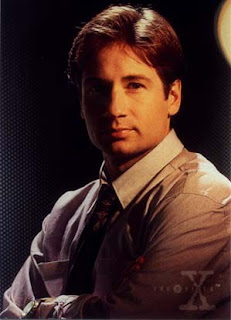 I imagine it was probably quite unsettling for my mother to discover that her pre-teenaged daughter was in love with a forty year old man, but to a kid nursing her first intense crush it was a revelation. I loved his awkward, deadpan manner of speaking and the way he relentlessly followed his beliefs despite resistance from everyone around him.

At thirty one, it's obvious to me that Mulder is just a textbook example of male privilege. I mean, if I started ranting about aliens and spending thousands of dollars on the company expense account chasing after a hunch, I'd be fired so fast. How does he remain employed? Why is he coddled through his fantasies rather than being demoted to a desk job doing data entry? As a woman and a feminist, Scully is clearly the hero of the story while Mulder is a paranoid, obsessive weirdo. But love is blind, and twelve year olds are not the best judges of character. 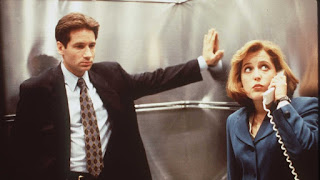 Fuelled by nostalgia, I frequently joke that my tastes haven't changed much in the last twenty years. I enjoy rewatching shows of yore with fresh eyes and life experience, finding their flaws and loving them anyway. The X Files is no exception, and what seemed to my parents like a temporary foray into the dark arts has remained one of my favourite shows. I have a UFO tattoo on my arm and curate "best episode" playlists to introduce friends to the show. The desktop background on my work laptop is the I Want To Believe poster and my morning alarm is the theme tune.