"Honestly, I don't know what's up with my stomach these days." I say to my boyfriend, one hour after my second bowl of lunchtime cereal.

Josh squints through the thick cloud of sulphurous farts between us and coughs in agreement. "It's a mystery."

I've never had a particularly healthy relationship with food, but it became apparent once more this past winter, when my brain decided that since there was nothing objectively wrong with my life that it would therefore endeavour to make me feel as soul-crushingly sad as possible. I was working all the hours, which was great because it meant there was no time for inconveniences such as lunch and dinner, so I got to subsist off a flask of watery Huel and the sugariest flapjack the cafe at work had on display.

My eating patterns have generally been as follows: chow down on as many family-sized bags of chilli heatwave doritos as is possible in a week, until the fat under my chin starts to feel like I've got a pillow under my face as well as the two or three propped up against my back, as I heavily romanticise the time I when was 22 and would save my calorie intake for evening ciders. I then sigh wistfully at the memory of lying in bed during the day, tracing a finger along the bony ridges of my hipbones. After consistently overeating all the wrong things, I'll have a few weeks of walking into the living room topless to proudly shout "look at my boobs!" at my boyfriend until the guilt and shame sets in... then it's back to coffee for breakfast and having dinner only under duress.

I have never really been able to nail down that aspect of adulting that requires three square meals a day whilst maintaining a healthy relationship with my body. As a child, if I wanted a snack I was told that there were carrots in the fridge (joke's on you mum, I actually love carrots) and the first time I ever drank a Dr Pepper I nearly passed out from a caffeine overdose. Seriously, I was shaking.

When my dad began giving me £2 every Friday for my highschool lunches, I did what any responsible teenager would do and spent the money on push-pops and atomic fireballs. At university I was too socially anxious to use the communal kitchen so survived my first year on cornish pasties from the corner shop until I could cook pasta bake every night with my housemates in our shared student house.

How do people do it? The concept of needing to eat at a certain time, regardless of whether or not you're actually hungry, is an alien concept to me. My ideal routine is lunch at 11 and then lunch again at 2. This way I'm saving so much money by not having to pop into Asda on my way home every evening to pick up a creative and delicious dinner, that I have more money to spend on cigarettes, which have the benefits of suppressing my appetite and killing me quicker.

This year, I decided to cut out dairy to see if it was the presence of milk and cheese in my stomach that made my gut sound and smell like it was disgesting a corpse. I battled through curdled soy milk coffees until I found a relatively foolproof system (don't let the kettle fully boil) and switched to vegan cheese, feeling super healthy whilst ignoring the bright red label indictating the fat content on my garlic and herb cheddar substitute. I've never felt better!

My rule was that I would try to be as vegan as possible, where possible, which is pretty easy when you already have the eating habits of a robot toddler.

Things I have eaten whilst attempting to be vegan: 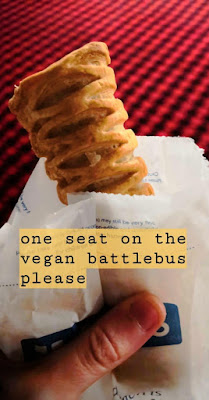 As you can see, my commitment to a healthier lifestyle is going really well. But aside from these cheats and misdemeanors, I'm doing it! I turned jackfruit into pulled pork and at work I walk an extra few steps from the coffee machine to the table where the soy milk is kept. I tolerate a new kind of yoghurt.

Luckily I've been smart enough to prefix all conversations about my diet with a ready-made spiel about how I'm doing this for the environment. No methane beef gas here, this is all human.

But seriously, doing the bare minimum is really what we should all be doing. I've become one of Those People who open the fridge and experience a split second of rage at seeing the cow milk next to the soya. I hope to one day develop the coping skills required to plan and execute regular eating, but for now the least I can do is eat some quorn to save the planet, y'know?