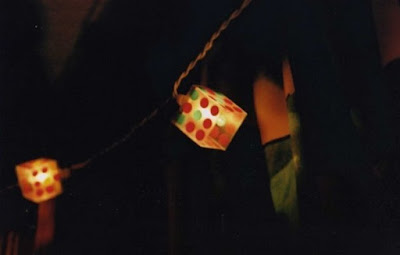 Ten years ago on this day, I had an abortion.

It's a date lodged permanently in my mind, a plastic-capped pin stuck in the map of my life. I file it away with the anniversaries of old relationships, the day I had my last drink, and the death of my friend David.

I've never written about my experience. There has been a line or two over the years, vague references in other pieces, but I've never devoted significant space to it. I didn't have the words, and maybe still don't. Raw honesty broadcast to strangers felt deceptive when I never told the man responsible. It took me five years to tell my mother, a texted confession at the bus stop. Somehow the truth of it felt harder to say aloud than all the other provocative pieces of my life I threw at her over the years, testing her reaction.

As with most events in my life, I'm narrating them even as they happen. I grew up with Livejournal and I process difficulties by laying them out in mental paragraphs, structuring and editing my internal sentences. I have endless fictional conversations, with myself and others. I looked through my old files trying to piece together a snapshot of my psyche, but there is a three week gap in April 2009 where I didn't write anything.

When I was pregnant, I just knew. I spent a sober night at the student union, feeling bored and protective of the thing growing inside me. I drank Sunny D, emulating Juno, just another story. When the nurse told me I was about four weeks in, I don't remember there being any space between the announcement and the referral for temination. I was relieved; having to justify my choice would have broken me and besides, it was obvious. "I think I want to focus on my career." I said, wandering home to the bemused looks of my housemates.

I made sure to look at the screen as the nurse smeared gel on my pudgy stomach, still only swollen from alcohol and pasta. I thought I owed it that much, to see its heartbeat. An appointment was booked and my best friend drove me from Stoke-on-Trent to Manchester.

The quiet waiting room looked like a bus stop. Rows of chairs were laid out back to back, and were filled with girls in comfy clothes. Some were with men, some were alone. I don't remember seeing any mothers, or maybe I was willfully ignoring them.

For my first appointment I swallowed a pill, clutching the tiny plastic cup of water as the doctor checked this was definitely what I wanted. I must have been impatient, desperaste to get it over with so I could resume my routine of sleeping in, writing, partying and not worrying about anything. I still clung to the hope that my ex-boyfriend and I would get back together, and the pregnancy was not his. The thing growing inside me, floating in my body like an aloe ball, was disruptive; a spanner in my works.

At the second appointment I pulled at the hem of my hospital gown as the nurse prised my knees apart and encouraged me to relax. I remember stepping out of my knickers and folding them neatly on the chair, and how vulnerable it felt like leaving home without your keys and purse. Another pill. I think I cried.

The Abortion Clinic felt like a factory farm. Five reclining leather chairs in a line as a couple of nurses patrolled from woman to woman, checking their temperature. My skin burned, sweat trickling down my back, and then immediately I began to shiver. In my fever, I was half-conscious, crying for a blanket and then shouting at the nurse take it away. I vomited once, twice. The girl beside me did the same. I wanted to reach out to her, to hold her hand. We were all in there alone, our chaperones in the waiting room, but none of us spoke to each other.

I remember my best friend driving us home, tilting the passenger seat back as far as it would go and letting me pick the playlist. My ipod shuffled Train's Drops Of Jupiter and I sang my fragile, fractured heart out. My housemate brought me yoghurt as I lay in bed wondering when it would happen. I staggered to the bathroom, and it happened. A few days later it was over, and I went out dancing.

Never has my choice not felt like the correct one, but still I revisit this day every year. In a parallel world, my child would be ___ years old. As one of the incredibly pro-choice, my guilt felt irrational. If this had happened to someone else, I would have assured them that a six week old collection of cells could in no sense be described as a person. So why, then, did I feel so terrible? This feeling lasted many years, coming up in many drunken conversations, but as I got older my angst lessened. Perhaps it was never really guilt, but the same "what if" feeling that comes from spurned love, missed moments and chance encounters. Maybe it was just my fear of missing out.

Ten years later, I am thirty-one and childless. I didn't get the career I wanted, but I live in relative contentment. When I was twenty-one, a lot of my friends were in their late twenties. I couldn't see the difference between us, but now the gap between who I was and who I am feels vast. In 2009, making hard decisions seemed easy, whereas simple inaction in 2019 feels complicated and painful. I am not old, but I am old.

Whenever I hear Drops Of Jupiter, I think back to that day and the car ride home. I tap my feet, matching the music, smiling, raising my aching body up from my seat to join in with the chorus. But tell me! the violins sing. My eyes stream, and as we hurtle down the motorway I feel the full weight of my fear, my hurt, and my hope for the future.