The Trouble With Trich 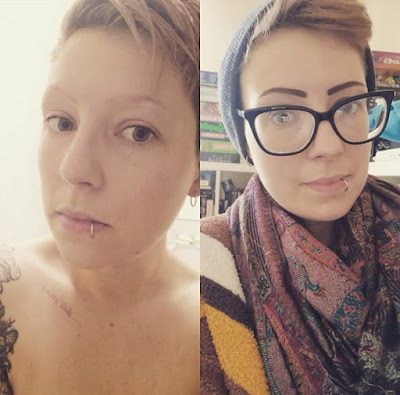 Do blonde people get trich? It must be such a waste. My dark hair ripples across my body like a sleek and sexy yak, refusing to quit despite the numerous chemical burns I have given myself when misjudging the developing time on a tube of veet. I first ripped out all my arm hair using a stolen roll of my dad's gaffa tape after an indian man in his forties pointed at my short sleeves and said "they are hairier than mine". I refused to go to the Good High School because they made you wear a skirt. Can you even imagine having fine hair that glitters in the sun like spun silk?

I can just about cope with the hair on my body if I treat myself to a twenty minute catch up over coffee with my epilator every morning and evening. The real source of all the bodily angst and self loathing are my eyebrows. I have the type of eyebrows that grow across my face as if they're running from danger. I have zombie apocalypse brows. After 17 years of surfing the treacherous waves of trichotillomania, my eyebrows have evolved to know that its safer to be outside the area of engagement.

My relentless facial garden is an absolute goldmine for this type of OCD. The moment I spy the almost imperceivable dot of a hair about to break the surface of my skin, I'm digging it out like a farmer in potato season. If eyebrows are meant to be sisters not twins, mine are at best estranged and at worst aren't answering that email you get sent by 21 And Me after they've uploaded your DNA to the matrix and found that you have a seventh cousin living in Canada.

My eyebrows are so bad at the moment that I'm even embarrassed at going face-naked in front of my own boyfriend, who has seen on the toilet - in action - after fainting and cutting my head open on the bathroom floor. But a few sparse hairs and half-healed scars where my eyebrows should be? He's not ready for that.

Instead, I plan my life around finding an uninterrupted two hours for the eyebrow tattoo liquid I just overapplied to dry. I have trained myself to nap sitting upright, just in case I wake with a sister melted halfway down my cheek. After I've enjoyed the brief thrill of appearing presentable in the office where I work alone, I'll eat-sleep-wake to repeat the agonisingly dull process all over again, because I am a person incapable of not showering every day and reducing my perfectly sculpted fake brows to two grey smudges.

It's difficult to explain to regular humans why I'm running late. 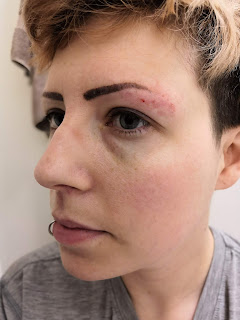 And then there's dermatillomania, which is such a ridiculous condition that you have to laugh at it. You know what would be funny? God says, looking down from heaven at my below-average-attractiveness-as-it-is ladyface. If we gave her a condition which makes her pick uncontrollably at her skin, resulting in a series of scabs and sores that will never, ever heal because, as I previously mentioned; she's unable to stop scratching at her face. If it doesn't feel smooth, my freshly-bitten fingernail will damn well make it so. The moment my body even hints that it may be baking a fresh zit, I've already cut into my skin with a pair of rusty tweezers like a back-alley surgeon and lanced all the available pus, skin and blood from what is now a very prominent gaping wound on my chin.

At this point I've pretty much forgotten what it's like not to have a rotating collection of scabs I can visit like tram stops and pick at when I'm bored/stressed/happy/depressed/awake. We all have our routines, right?

Sometimes, as a special treat, I lie awake in the dark and the silence as my partner twitches into unconsciousness beside me, and once I'm certain that he won't wake up I tiptoe into the bathroom and really go at it. I push, pick, poke and hack away until I'm a puffy raw mess. I have to squeeze the savlon directly onto my face like a liquid plaster to keep the blood from making me look like I just popped out at 2am to kill a man. Once I'm satisfied that I've really messed up this time, I creep back to bed and apply a coin-sized dollop of anti-blemish cream to my face. Hah!

Will I ever be free from being the meat in a trich/derm sandwich? Probably not, but thankfully it doesn't look like the cosmetic industry is going away any time soon, and they're more than happy to keep me supplied with all the green cream and concealer I can afford on a monthly basis until I can justify giving a trained professional £500 to tattoo me some eyebrows.
Or maybe just an operation to remove my hands.