How I Found My Musical Groove

When it comes to music, I don't know my arse from my oboe. Until October, I would have told you that a 'movement' occurred primarily after eating an appropriate amount of fibre, and I couldn't have picked Chopin out of a lineup.

Naturally then, at the end of 2018 I found myself working front of house at a music college.

I'm definitely one of those people who uses their own ignorance as a deflective shield. "Disinterested" is a blanket term for a lot of diverse pursuits I don't fully understand. Classical music? But without lyrics how would I relate to it? I look at art waiting for a mystical feeling or emotion to zap me like a lightning bolt.

Subsequently when I started, my main role was to make terrible puns. Cello, is it me you're looking for? 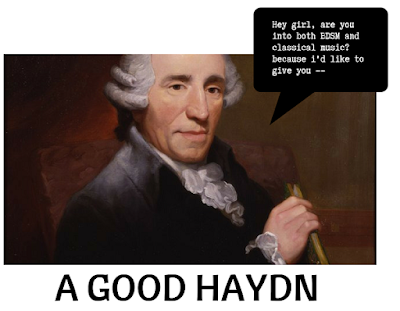 But gradually, an appreciation has sunk in. This weekend I sat in a roomful of children who were there to learn about the music of Haydn. Hidden in the wings, I suspect myself and the four year olds were on the same level of understanding regarding the famous composer. I listened to the presenters talk about moods and intention, asking the kids in turn what the sudden introduction of the cello felt like ('dangerous', 'grumpy') and pointed out the parts where the violins interacted with each other 'playfully'.

"If you listen to the piece, it sounds like the instruments are having a conversation."

Wow, mind blown. That's exactly what they were doing. How had I gotten this far in life without looking at it that way?

Art was something I didn't realise was missing from my life, because I did a creative writing degree and I watch a lot of movies. Over time, actively engaging with new stuff was replaced by Netflix. I dismissed anything I wasn't familiar with as old fashioned, elitist or of a specialism I had left it too late to learn, like a language.

For all the modules on critical thinking I did a decade ago, I had to admit to myself that in true waiting to leave style, I hadn't really engaged with anything in a while. Outside of sad girls with guitars repeating my feelings back at me, musically I'd fallen out of the habit of really hearing. Not all sound is porous; sometimes you have to put the effort in and really listen to it.

Similarly, at art galleries I would feel frustrated that I didn't feel affected by anything I saw. Visiting the city gallery with a renaissancely-inclined friend who helpfully explained things to me, dusting off the part of my brain which appreciated paintings. Turns out it's a lot easier to connect with an oil painting of a river if you have some context to it, and take the time to actually look rather than briefly scanning the canvas as a whole before moving on to the next piece.

"The thing I like about art is that every stroke you see is a decision."

Again, my mind was blown. I'd been thinking of the paintings I gawped at vacantly as serendipitous, somehow willed into being rather than carefully crafted. The crest of the waves, and how they would have been studied. Also, people in 1786 didn't have camera phones or Instagram so probably weren't yet desensitized to images of dead lions. In a Wikipedia-less world, they might not even know what a lion was. Suddenly I was looking at the images before me through the eyes of the intended audience.

With context and concentration, I'd found the final slices of the trivial pursuit pie I needed to complete my enjoyment. I'm still a total noob, of course. I might not be regularly streaming Bach on the bus, but I am less inclined to dismiss something as boring or impenetrable simply because I do not immediately 'get it'. I want to understand. To find value in everything. And isn't that one of the greatest qualities a human can possess?

(Apart from the knack for terrible puns, of course.) 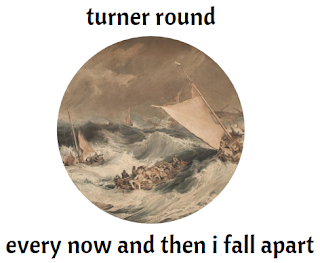