Fashion Unfriendly: Why I Pledged Not To Buy Any New Clothes For A Year 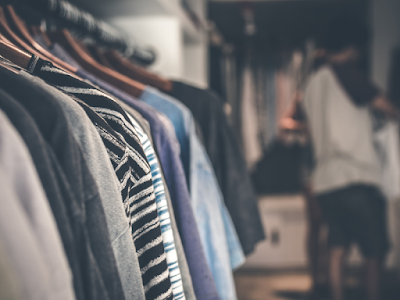 One of my many New Years resolutions was to stop buying new clothes.

Since I started earning money, I have exhibited particularly bad self-control on the high street. I have on more than one occasion reached into my wardrobe for something to wear to work and been surprised by what I pull out, with no recollection of ever having seen it before in my life. Even Marie-Kondoing my cupboards has not prevented the slump of miscellaneous fabrics which overspill out of their drawers and onto my floor and desk.

If I went anywhere near a clothing store, I had to buy something. The gratification of getting on the bus home having bought something, anything, was like a drug to me. If I didn't find even a t-shirt in town, I would feel a crushing sense of failure. Why? My reasons for shopping were uncomfortably close to my reasons for drinking and above all were rooted in insecurity. And you should never do either on an empty stomach. A new outfit was an instant fix, a change from my current state which was "fat", "repulsive", "unfeminine". We abuse ourselves so easily and without thought.

But in the midst of December's existential dread, I looked my crumpled mess of £2 Primark finds and boxy H&M-wear and was struck by how disposable most of it felt. I thought about how many clothes must exist just in the shops of Manchester alone and how many actually are sold. Are clothes like rats or spiders, are there a certain number of new items made per human in the hope that someone buys them? Google told me that the average person in the UK buys a suitcase-full of new clothing each year. Where does it all go?

Well, according to the Guardian, 235 million items of clothing are straight up chucked in the bin each year. That's... a lot. Hypothetically speaking, if no new clothes were produced in 2020 we'd be fine. Trash pants end up at the dump, in landfills, with an estimated 95% of clothing there actually able to be recycled.

But some people do recycle clothing, which is great. People are more likely to throw clothes away than recycle or donate them, either through time-constraints, laziness or believing that their grubby old clothes won't be accepted by charity shops when in reality most damaged or worn out clothing can be repurposed as cleaning and polishing rags. Over five thousand gallons of water are needed to manufacture a t-shirt and a pair of jeans, so recycling cotton in particular means there is less water being used in the creation of new garments. However, not all fabrics can be recycled. Synthetic fabrics can take years to decompose and emit damaging gases. Not everyone has the luxury of buying expensive linen clothing, of course, but plastic microfibres from our clothing make their way into the water supply.

So yeah, the clothing and textile industry is one of the biggest polluters on the planet, second only to oil. I started to feel uneasy about buying another pair of £3 plimsolls from Primark.

Starting from the 31st of December, I set myself the challenge of not buying any new clothes. New clothes, because I'm running out of vices and it's good to have some. For the last six months I've appeased my restlessly unhappy side with the occasional reward, but they've all come from charity shops or second-hand selling apps like Depop or eBay. I have not bought a single item fresh from the high street.

Not buying any new clothes has given me the benefit of no longer forcing myself through crowded streets, no more circling shopping centres with the alertness of a starving lion hunting its next meal. At first, it was a struggle. My FOMO was painfully apparent whenever I saw a bright red sale sign in the distance and my heart started fluttering in my chest. What if I missed out on a bargain? This year, I experienced serious anxiety symptoms as I forced myself to walk through TKMaxx without stopping to look at anything.

Whilst the fashion industry isn't going to stop selling us a new wardrobe for every season, not buying new clothes is one small thing I can personally do to withdraw my participation the harmful effect the industry has on the environment. There are companies that produce eco-friendly products of course, but being able to purchase them is a privilege. For a really long time I could only afford to buy clothes from Primark, and major issues like tackling global warming shouldn't be a point of middle class smugness. I bought a work shirt from a charity shop for £1!

Breaking habits is hard, and I'm not claiming to make any revolutionary statements. Don't burn down Topshop. But, like my attempts to remove dairy from my diet, this experiment has highlighted how the things I thought I needed weren't as necessary to my life after all. The serendipity of finding a £4 blazer in Barnados is way more thrilling than queuing in Monki to buy the same new dress as the two people in front of you. It's only April, but I'm determined to last the rest of the year without breaking my resolution.

At least, until I need new knickers.