Occasionally I have to take a step back from whatever I'm doing and remind myself that it's ok to fail. I am terribly self-competitive, and falling short of the arbitrary standards I've set myself is liable to induce sulking. But that's ok, because failing is an important part of life.

Failure gives us the wisdom and knowledge to make better choices. Failure makes us work harder, and better. Failure teaches us better judgement. Failure helps us grow as people. It was Robert F Kennedy who once said, "Only those who dare to fail greatly can ever achieve greatly."

WHAT THE FUCK IS THIS BULLSHIT.

I downloaded the Duolingo app just under a year ago, mainly to feel productive in the morning before walking to a job that was making me sick inside. I decided to learn German, having enjoyed it in high school. Well, time to give it another go. 7.30am was my time to shine as I became better and more cultured, a frau der welt.

And, give or take a few days (thank you, Streak Freeze), I kept at it. My German is now ganz gut, providing I stick to describing situations in the present tense and do not speak a word of it aloud. I can spot a conjunction a mile away and pluralise effectively. I can offer to pay for things (not useful) and ask my friends to bring me coffee at 2pm (very useful). 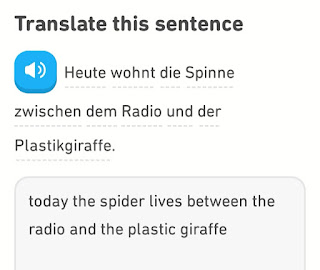 And then I missed a day. The owl greeted me this morning with its sad, watery augen and for a moment, I contemplated paying the £8.99 a month to be resurrected, phoenixlike, from the grave. It gave me a real physical ache in my chest, seeing the sad grey zero where all my hard work had been. Suddenly it felt like the last 344 days had been for nothing, a total waste of my zeit.

Truly, I did liebe lernen deutsch. At least for the initial 200-or-so days. After a while, the daily reminders started to feel like a nagging eltern, an albatross around my neck. My focus had shifted from learning german to "completing the game", which was in my mind achieving 365 days of unbroken, uninterrupted play. In true waiting to leave fashion, I was doing the bare minimum in the mornings; earning the XP needed to maintain my highscore and then returning to scrolling through social media. I memorised just enough to make it through a module, but the knowledge had evaporated by 8AM. 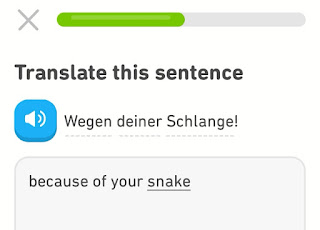 What did I learn, ultimately? As well as a surplus of German words that will make visiting Berlin less awkward than when you're standing in a restaurant with the server shouting "teller?!" at you as you stare back blankly, I guess the past year further drove the point home that there's no point in half-arsing something just so you can give yourself kudos for it.

Why are you doing it? The impressed expressions of your peers only matter if you're not lazily skim-reading multiple-choice options and shrugging off typos. Who are you doing it for? Self-praise means nothing if you don't mean it, or feel it.

I'll still continue to learn German using Duolingo, but I won't be attempting another long learning streak. I don't want to spend five minutes correctly guessing at words; I want to remember them long after.