As An Alcoholic, Is There A Place For Me In The #MeToo Movement? 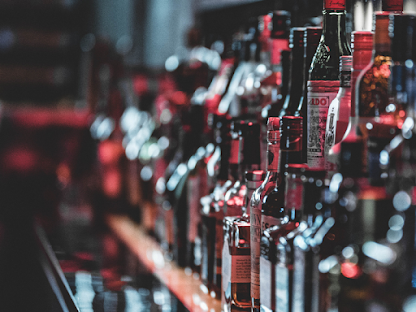 “Were you drunk?” My boyfriend sometimes asks when I’m recounting a painful experience from my past. It’s not meant maliciously but often the words stop me in my tracks. I know it's the price I pay for being open about my alcoholism, and the twelve years of my life I wasted drinking everything away. I know that my behaviour carries its own faults and responsibility, that it makes me an unreliable narrator to some extent. So much has been lost, reconstructed, processed in the six years I’ve been sober.

I also hope it’s being asked to understand my reaction to the event rather than question its validity, but with other people this hasn’t always been the case. A woman’s sobriety has historically been called into question during these discussions. When I was younger, you deserved everything that happened to you if you left the house dressed a certain way, stayed out too late or used chemicals to lower your defences to the dangers of the outside world. I wore my drunkenness Iike a suit of armour; shielding me from thinking or caring about myself, others, or anything much at all. Defense isn’t protection though, and the effect alcohol had on my motor-functions and decision-making severely harmed me on more occasions than I can count. In the agonising mornings that followed my blackouts, through the rolling nausea and panic, I felt I deserved everything I got.

Amidst the debates of the #MeToo movement, I find it difficult to stand on solid ground. So much of my twenties are a blur, but I can distinguish my own stupid behaviour from the handful of instances of violence that I experienced. My litany of regrets are stacked floor to ceiling in my mind, but I don’t confuse them for non-consent. I was out of it, sure, but I ran headlong into foolish situations with the bluster and bravado of the inebriated and insecure. Fine, so be it. Reconciling the moments of my life that don’t feel like that have been hard: when it comes to sexual assault, am I allowed to speak out if I was wasted?

“Were you drunk?” A loaded question. It’s true that I did have alcohol in my system when I was fifteen, but it was following six months of confusion and coercion. My first relationship with a man seven years my senior who worked at my school. Once the initial furor over our secret correspondence had died down, my parents left me to it. But it wasn’t forbidden love, just an isolated teenager in a training bra who’d never been in a situation where she had to say no. And afterwards, I drank to forget; to create a lively fun version of myself who was in control of all the bad and stupid things that happened to her. I drank to prove I wasn’t broken, to increase my tolerance to other peoples’ bodies to avoid the panic attacks that would sometimes encompass me. At university I revelled in the storytelling of the night's events with my friends. I was cool. I was chill. I was choosing this.

I’d had three drinks when the man I’d gone on a first date with who wouldn't let me leave his house, then his room, then his bed. Is that more forgivable? Do I have the sword of justice and morality on my side, balling the clothes I’d worn into a bag at the bottom of my wardrobe? Or should I have expected it? The idea that you should be able to opt out once you’re in someone else’s home wasn’t particularly popular, and I know so many people who have closed their eyes and got through it in order to avoid causing a fuss or hurting the guy's feelings.

If you believe that a drunk woman deserves to be raped, then my final story is probably a life-affirming moment for you. Tell all your friends, put me in a powerpoint slide as the definitive example of deserved destruction.

I'd been drinking all day, keeping the party started by texting everyone I knew in the vicinity, urging for "shots, shots, shots!", cradling a bottle in one hand and a cigarette in the other. I felt so popular; the glue holding this group of people together. I drank past the point where my brain connected with my body. I knocked a jumble of glasses off a pub garden table, smashing them onto the ground. I missed my last train home.

It was just flashes after that. I remember my trainers scraping the pavement as he dragged me back to his flat. I remember the lights of the shops we passed, the indiscernible glow of off-licenses waiting for their final few customers. I remember climbing some stairs, and then everything goes black. I came to in the middle of it, caught and cornered like an animal. Then darkness. I woke up with a mouth like an ashtray, stinking and disorientated. I had no idea where I was. He was awake. I remember an intense shame, remember thinking, "If I say no now, he's going to think I'm a slut." Maybe if I was sober this time, I could reclaim a piece of my dignity, not be the girl who could only have sex drunk. But it hurt, and my face reflected that. I remember pushing at him, pushing him off of me, this man I'd met only a few times before. It hurt a lot. But he wouldn't stop. I closed my eyes and waited for it to be over.

In the kitchen, he made me a cup of tea and mocked me. "You couldn't even stand up." He said, laughing. "You had no idea what you were doing." I swallowed the bile in my throat, the anger that was in danger of pouring out of me. I was acutely aware of not having looked in a mirror yet, worried my eyebrows were smeared across my face. I hurt all over. I had no idea where I was. I probably laughed. I probably laughed along with him.

Every woman has at least one story about an unwanted advance, from being approached on the street by a stranger to being groped on a dance floor to some guy who thought no was just a yes that needed more convincing. On pavements and in taxis, in homes we rent, own or visit. We live in fear of the line that is a moment away from being crossed and the guilt of whether our reaction when it happens makes us culpable. Reader, I froze. Disassociated. Waited. There are no lingering scars on the faces of these men from when I used my nails and teeth to fight them off.

I was a drunk girl.

Is there a place for my experiences in the #MeToo movement? Of course, you’d probably tell me. You couldn’t consent. You didn’t consent. And I appreciate that, I do. But I struggle to reconcile these moments that haunt me still with who I was as an alcoholic; my bad behaviour, my selfishness and conceit. Whenever I’ve tried to write about this, I imagine the string of comments under the post - “Well, you didn’t seem too upset when you did this _____”. What right do I have to complain about a few specific incidences over a decade of debauchery? Shouldn’t I feel lucky it only happened a handful of times? These weren’t my rock bottom moments, they didn’t make me stop drinking, so were they really as bad as I’m making them out to be? What did I expect?

At the time, I felt like I deserved it. Eighteen years since I crept out of bed and cried in the next room, sniffling into an oversize band hoody with my arms wrapped around my body. Distance has appalled me to the type of person who would do that to a fifteen year old girl. Seven years since that night I was carried back to an unknown flat and taunted in the morning, I no longer feel like I deserve it. Appalled at the kind of man who would do that to an unconscious, slurring woman. Not a human; a limp object, a thing. I will spend the rest of my life working on the ‘righteous anger’ I wish that these experiences would evoke in me. Years reconciling the fact that it happened with the fact that alcohol played a part in it. And I will always hesitate to speak up, for fear that someone will tell me it was my fault.

I don’t have the answers, only a consolation to others who live with this conflict.

You didn’t deserve it either.